With the fishing season mostly over in the Gulf of Saint-Lawrence, the Department of Fisheries and Oceans said it is meeting with industry to look at whether protection measures should be eased up before next year.

The 2018 fishing season was controversial, with fishermen in the Acadian Peninsula protesting the new federal measures put in place to protect the North Atlantic right whale.

Last year was a historically deadly year for the endangered mammal. Eighteen whales died — 12 of them in Canadian waters.

Necropsies found many of the whales had become entangled in fishing gear or were struck by ships, resulting in strict closures of fishing areas and speed limitation on vessels.

Adam Burns, director general of fisheries resource management with Fisheries and Oceans considers this summer a success from a conservation point of view.

"There were no reported right whale mortalities in Canadian waters this summer,"  Burns told reporters during an update given Friday afternoon.

"We attribute this in part to the successful implementation of this year's fisheries management measures."

To date, 135 individual right whales have been seen in the gulf — up from 114 last year.

DFO said it will continue aerial surveillance until the whales have migrated south for the winter.

"We know that the measures we've put in place this year have had real economic impacts on some communities," Burns added.

Burns said Ottawa has begun meeting with harvesters from northeastern New Brunswick and from the Gaspé​ region of Quebec and will continue to do so over the coming weeks. 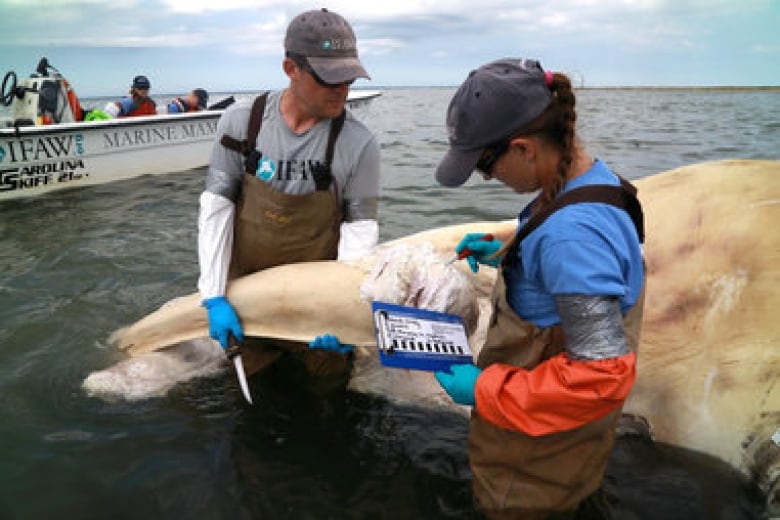 Although he said it would be premature to speculate exactly how the measures might change, he said Ottawa wanted to know how they impacted fishermen to help it "mitigate those effects in preparation for next year's summer fishing season."

This year, two North Atlantic right whales have been found dead — both in U.S. waters.

The latest was just last week off Martha's Vineyard, likely the result of entanglement, according to the National Oceanic and Atmospheric Administration.

It was a year-and-a-half-old male, believed to be one of only five calves born last season. This year, scientists believe there were no births.